Sweetcorn and beans grown on Gingin soil are gracing the shelves of supermarkets around the world thanks to the hard work and vision of the Trandos family, whose business success story is nothing short of inspirational.

“To say we came from humble beginnings is an understatement,” laughs Jim Trandos, who, along with brother Arthur and cousin Michael now runs the company established by their Greek immigrant grandfather Dimitrios Trandos back in 1939. Sons Nick and Michael continued to grow the Wanneroo-based family business in into a thriving market garden, and were very involved in supporting the early vegetable-growing industry in WA.

When Jim and Arthur left school as teenagers to join the business they spent plenty of long hours toiling in the packing shed before working their way to the top and taking over the running of the Trandos empire from their fathers, who remain as directors. However, the company has evolved, and these days the brothers can spend more time travelling the world seeking new contacts and chasing the best new machinery than hauling produce. It’s the result of a seven-year-long expansion project which has transformed the business  into a mammoth-scale vegetable-growing machine, capable of churning out a mind-boggling million cobs of corn and up to 30 ton of beans a day, every day of the year.

The purchase of the Gingin farm in 2011 complemented the powerhouse farm in Broome enabling year-round production. “We are seeding corn every week, sometimes twice – and maybe 2000 km apart,” says Arthur, who hops between the three company owned farms in Wanneroo, Gingin and Broome. “We can’t afford to have one day without corn in our packing shed.” They built the former cattle property in Gingin from scratch and it’s now capable of massive-scale vegetable production, with huge pivots delivering water and nutrients to each block of vegetables. They grow more corn than beans because, as Arthur says, people eat more corn.However the rotational bean crop is equally important, as it adds nitrogen back into the soil.

After jumping through all the right hoops to gain their precious water licence, Jim and Arthur have invested a phenomenal amount of money into its management, with a state-of the-art computer controlled irrigation system that can be activated from anywhere in the world. “The bottom line is, it costs money to have and maintain water and we don’t want to use a drop more than we have to” says Jim. The Gingin farm is managed by Bindoon CAC graduate, Matthew Jupp who, Arthur says is an invaluable asset to the business. Along with workmen Ryan Witherington and their nephew Liam Raykos he is responsible for the day-to-day running of the whole farm, including looking after the lucky cattle herd who consume all the trimmings and seconds.

On average it takes 75-90 days to grow a cob of corn, depending on the season. It’s harvested in just a few hours using custom built machinery imported from Italy and the US. The shiny machines are clearly Arthur’s passion, and he takes pride in investing in the best available technology. After over-night harvest all the vegetables are trucked to the Wanneroo packing shed, where value is added to the product with customised branding and packaging for different chains. “Part of my job is to visit every supermarket and shop that I can,” says Jim, “You have to learn to think retail. You have to think like the consumer”. Jim says meeting the stringent quality and presentation demands required has been a huge learning curve.

He had almost given up on breaking into the export market when he received the call that changed the ball game. “I went over to watch the cricket, and on the way back I stopped  in Dubai,” he says, “I saw the product there – and I knew ours was better, but they had a long-standing agreement with a South African supplier and I respected their loyalty. Months later his patience paid off. “They wanted to know how quickly I could get product to Dubai” he recalls, “It was on the plane that night.” They are now sending 4 consignments a week to UAE as well as Hong Kong, Kuala Lumpur and Singapore, and they haven’t looked back. With a new certified organic pivot ready to start production in the next few weeks these guys are poised to take on the world – with produce grown right here on our doorstep. 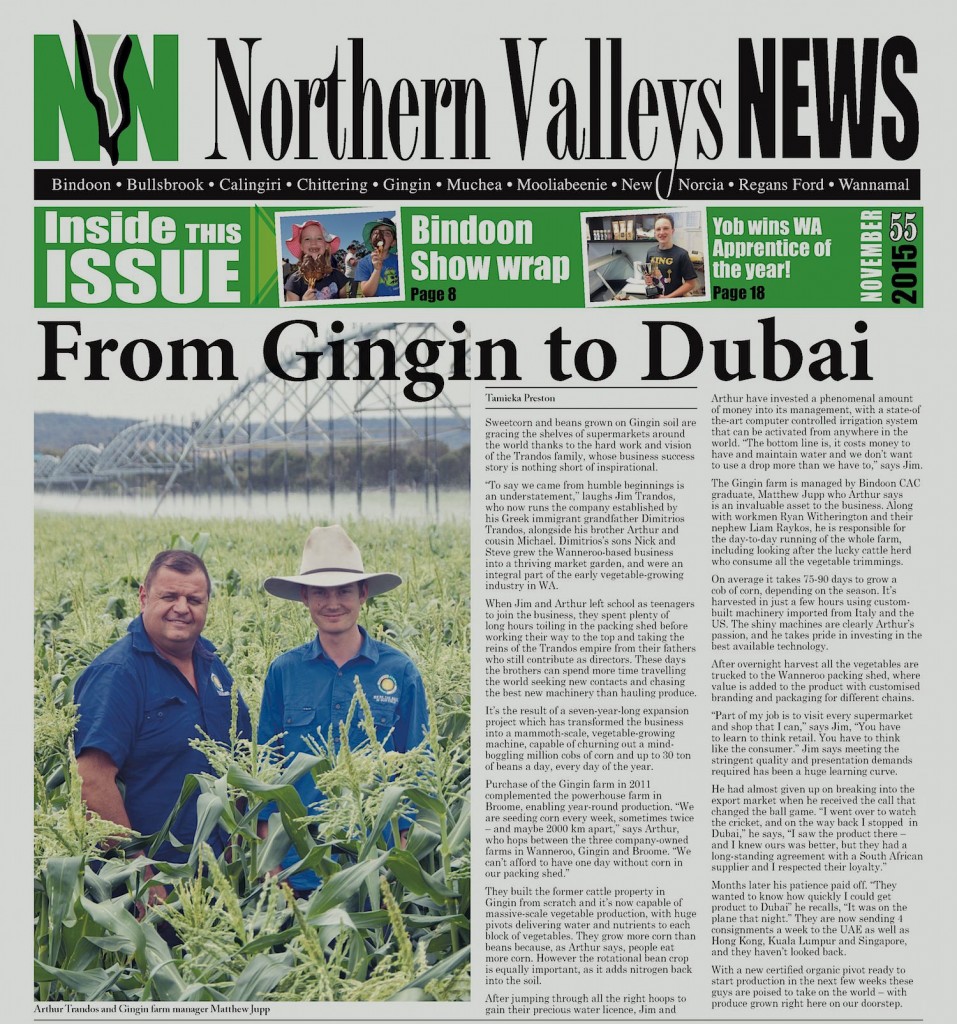